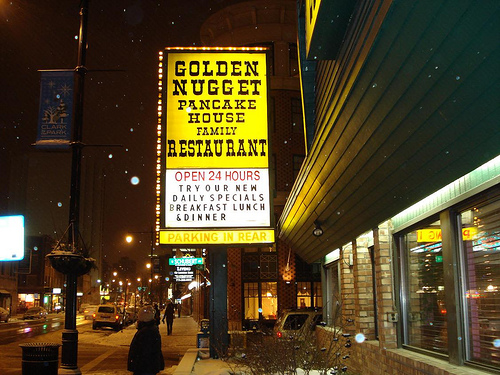 Drunk At 3AM? Here Are 5 Chicago Restaurants That NEVER Close

Many a Chicagoan have ended up here on a late night and wondered how they made it in and out of Greektown—but remember this—that gyro was probably delicious. Perhaps give it a go during daylight hours too.

Fried fish and shrimp whenever you want is a luxury. You can explore this luxury at Lawrence’s on the near South Side. Get your fried shrimp thrown into a po’ boy or tossed onto a bed of fries late into the night and early into the morning.

Golden Nugget’s iconic signage has been looking over Chicagoans that are hungry for late-night eats since 1966. Along with standard breakfast fare, it serves a variety of sandwiches, fried steaks and chilaquiles. It’s a classic spot to hit up after a late-night bar crawl or concert.

There’s a lot to do around Rush and Division. Once you’re done doing it all, head over to the nearby Tempo Café and enjoy some of the best late-night breakfasts you’ll never remember. If you’re there while the sun is rising, you might run into some unfamiliar faces, but very familiar bodies.

Not only is Chatham home to arguably the most popular hip-hop artist right now, but it is also home to one of best doughnuts in Chicago. It’s worth taking a chance on Dat Donut at any hour you feel the need for that sweet, floury sugar rush. If you’re feeling daring, go with the toilet seat-sized Big Dat. It’s open 24 hours, six days a week.