The president of Koval Distillery likes to think that each bottle of whiskey she makes is a Chicago flag of sorts, proudly made in the city and planted in thirsty locales all over the world.

“Distilled in Chicago” is printed on each label and is important to the brand. But Sonat Birnecker Hart fears the city’s review of its industrial corridors could make it tougher for craft beverage companies like hers to find the necessary room to grow in Chicago.

For the past four years, Ravenswood-based Koval has searched for a larger facility, but has struggled to find affordable manufacturing space in areas that also will draw enough tourists to pack a tasting room.

“We’re romantics. We want to stay in the city. But ultimately, we’re bursting at the seams and we’re going to have to do something,” Hart said. Koval’s challenge is a familiar one among brewers and distillers, which have proliferated in Chicago in recent years even as traditional manufacturing has continued to decline. Those who run these companies say they bring needed jobs and tourism to the city. The trick is finding affordable manufacturing space that doesn’t conflict with neighbors, but is still close to hot neighborhoods and public transportation.

Planned manufacturing districts, encompassed by the very industrial corridors districts that are under review by the city, have been the answer for many. Since 1988 these zoning districts, which prohibit residential development, have provided breweries, distilleries and other companies room to expand without the challenges of fitting into a neighborhood full of homeowners. But depending on the outcome of the city’s review, some manufacturing districts could be changed to include other uses — and some might vanish altogether.

“It’s outlived its usefulness,” said Ald. Brian Hopkins, 2nd, of the Clybourn manufacturing district. “We need to be open to all possibilities.”

Hopkins, who represents the area that includes the Clybourn district, believes it’s time for that particular zoning district to be “decommissioned.”

The Goose Island brewery, which has been in the Clybourn district since 1988, would be protected if the zoning regulations were to change, Hopkins said.

Today, there are about 180 craft breweries in Illinois, about 80 of which are in Chicago, said Justin Maynard, executive director of the Illinois Craft Brewers Guild. Just four years ago, there were only about 20 craft breweries in the state with roughly half of them in the city. At the time, Goose Island founder John Hall said he didn’t know much about the advantage of the planned manufacturing districts, or PMDs, but quickly came to realize their benefits. He was able to invest in the site without worrying about conflicts with residential developments popping up next door, he said. Goose Island even brewed a beer called PMD Mild, a nod to its industrial setting.

Still, Hall said it makes sense to evaluate whether the zoning districts could be better utilized.

“With today’s economic situation, it’s obvious the city needs more tax revenue. It’s time for a review, but you can understand the value of them,” said Hall, who’s no longer involved with the daily operation of Goose Island.

The North Branch corridor, to be followed by the Pilsen and Little Village corridors, is first on deck for the city’s review of its 26 industrial corridors, which encompass the 15 planned manufacturing districts. North Branch meetings begin next week; the meeting schedule is available on the city website.

Zoning changes will be initiated by property owners and developers and subject to City Council approval, said Peter Strazzabosco, deputy commissioner for the city Department of Planning and Development, in an email. The planning department will develop “framework plans” with potential land use changes based on each corridor’s “individual attributes, market trends and extensive community input,” he said.

“While an affordable location is a fundamental concern for virtually any business, there is no known shortage of available space for brewing and ancillary sales activities in any zoning district where they are permitted,” Strazzabosco said.

Some say the city should have acted sooner to support industry. Steve DeBretto, executive director of the Industrial Council of Nearwest Chicago, said “piecemeal” zoning changes and general lack of support from City Hall in recent years have threatened the availability of manufacturing space.

“There’s been no uniform plan or message regarding PMDs. They’re starting to talk about it now, but the unfortunate reality on the ground is that it’s fueled (real estate) speculation, absent a comprehensive plan,” Debretto said. 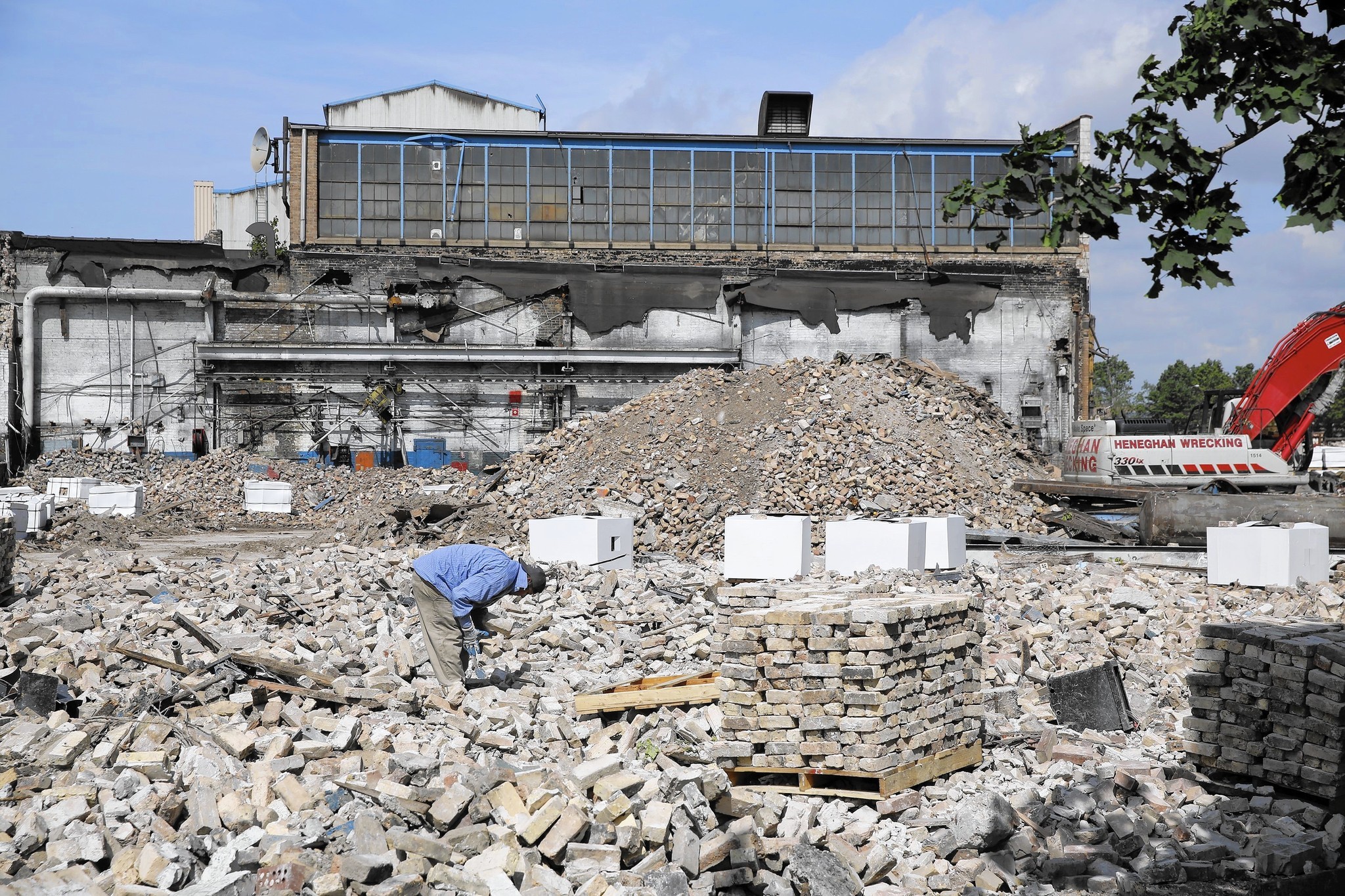 The former Finkl steel plant site is central to the debate of whether manufacturing districts protect industry or inhibit needed change. When A. Finkl & Sons moved to a larger facility on the Far South Side in 2014, it left more than 20 acres in the North Branch industrial corridor ripe for redevelopment. A brownfield redevelopment plan for a 34-acre swath of land in the North Branch corridor, which included the Finkl site, included several possible scenarios for an “urban innovation district.”

According to the plan completed in December 2015, such a district could include research and development offices, tech offices, and a brewery and distillery, all while creating as many as 5,500 jobs.

But Mike Holzer, executive director of North Branch Works, the nonprofit community development corporation that commissioned the redevelopment plan, said city representatives told him in an April 1 meeting that they’d like to consider allowing other uses, including residential, in the North Branch corridor.

“It’s feeling like this is already a done deal. So we’re looking at getting what we need, as opposed to what we want. And what we need is to hold the line on residential and big-box retail and create the innovation district,” Holzer said.

Like Koval, many of the city’s largest and fastest-growing craft breweries consider Chicago to be crucial to their identities. Revolution Brewing’s portfolio includes beers like Fist City, marketed as a Chicago pale ale, and Rev Pils, a Chicago pilsner.

Josh Deth, founder of Revolution Brewing, said he didn’t seek out a planned manufacturing district for his recently expanded 90,000-square-foot brewery, but the building was affordable and available precisely because it was in the Kennedy district. And the brewery’s truck traffic isn’t bothering any neighbors, he said.

“It’s nice because you feel like it was intended for you and you belong there and you don’t have to fight with the neighbors,” Deth said.

In April 2014, Lagunitas Brewing Co. began production in its 300,000-square-foot brewery in the Douglas Park neighborhood — also in a planned manufacturing district.

Each week, “thousands” of people visit the brewery every week for tastings and tours, via trains and tour buses, bringing economic activity to neighboring Pilsen, said Lagunitas spokeswoman Karen Hamilton.

“I think anytime you have an area that’s struggling, the more people you can bring in, the better,” Hamilton said, speaking generally on the economic benefit of craft breweries.

Like Minds Brewing, a much smaller operation with a 10,000-square-foot brewery in the West Town neighborhood, is also within a planned manufacturing district, the increasingly bustling Kinzie corridor that extends west from the Loop.

Zach Houlahan, co-owner of Like Minds, which also has a brewery in Milwaukee, said he could see some benefit to allowing other zoning uses. Additional residences in the area would mean more people drinking Like Minds beer, which would support a taproom the brewery is planning to build, he said. 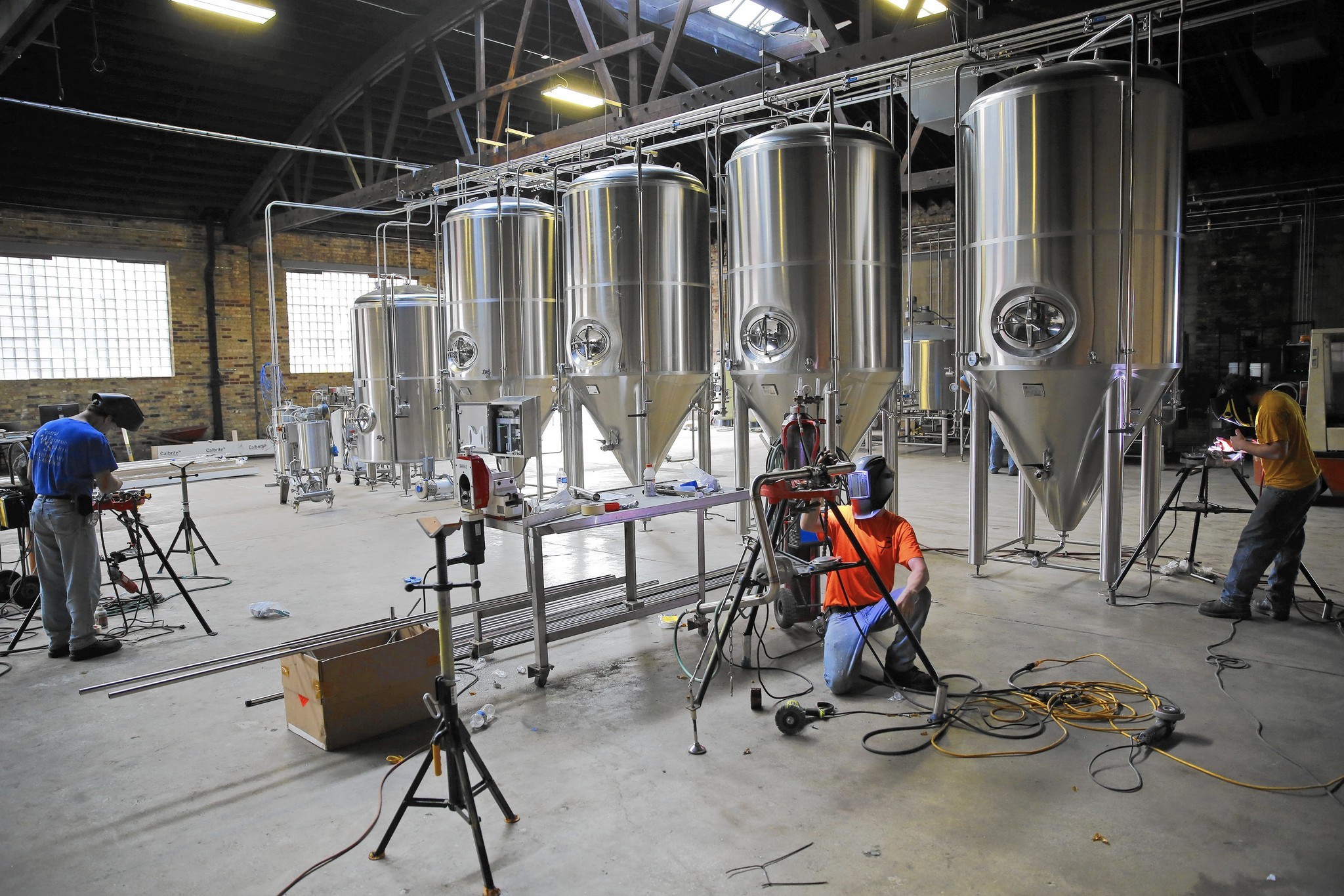 “We assumed with the proximity to public transit, the United Center and downtown, that this area would sooner or later pop off,” Houlahan said.

Of course, craft breweries and distilleries are but one small piece of a complicated puzzle. Larger market forces are work: High-end office, residential and retail developments are branching out from the Loop, compressing areas previously designated for manufacturing and other business uses.

Brian Ripp, a commercial real estate broker at Strauss Realty specializing in industrial property, said there are still plenty of properties zoned for manufacturing in Chicago that could work for breweries and distilleries. Planned manufacturing districts and their restricted zoning are antiquated, Ripp said, and “their day has come and gone.”

For now, Koval’s still looking for its new home. Having outgrown its current Ravenswood facilities, Koval hopes a new location will include a 40,000-square-foot distillery and tasting room. Though Chicago’s distilleries are far fewer than its breweries, Hart believes the potential is there to capture tourism in the same spirit as the Kentucky Bourbon Trail, a Kentucky Distillers’ Association program that promotes the bourbon industry in Kentucky.

The planned manufacturing districts don’t have to be preserved exactly as they are, Hart said, but she hopes the city will find a way to preserve its long tradition of supporting industry for this new wave of craft beverage makers.

“Chicago is a manufacturing town. We make things. The City of Big Shoulders isn’t necessarily the city of laptops. And while that may be the future, a lot of towns make that their future. Chicago’s always been great because it has everything,” Hart said.